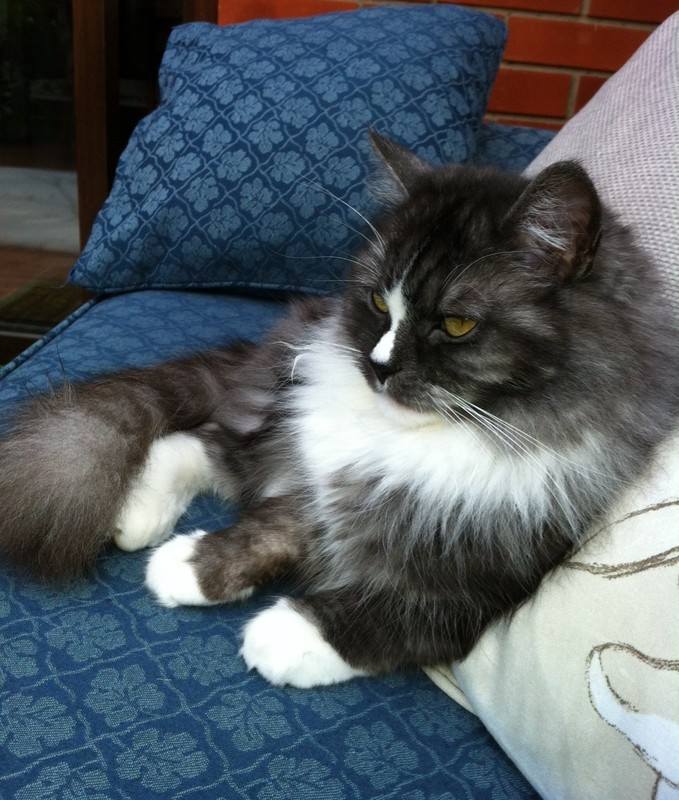 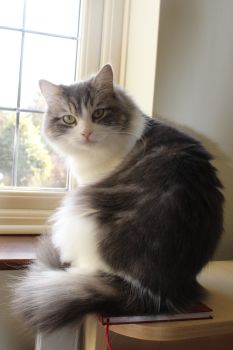 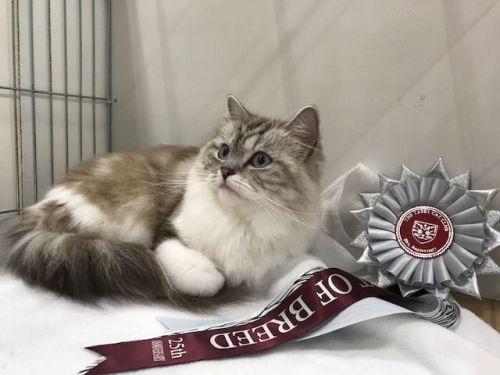 The Ragamuffin is a large semi-longhaired cat bred for its superb temperament and is an affectionate, teddy bear of a cat with a laid-back nature that can take up to four years to fully mature. A RagaMuffin is a new breed in its own right, and is not a cross between a Ragdoll and a British Shorthair (or similar). The UK RagaMuffin Club formed in 2008 is affiliated to the American RagaMuffin Associated Group, and has agreed to breed to the same guidelines in this country. Ragamuffins were first recognised in Britian by the Governing Council of the Cat Fancy (GCCF) in 2010.

The history of this breed makes a bizarre story, but is well documented and can be pinpointed to a Californian breeder of Persian cats, Ann Baker. Ann Baker had a neighbour who looked after a colony of feral cats, including one named Josephine, an unregistered white longhair. Josephine used to produce kittens of very unsound temperament until she had a road accident. Following treatment at a local animal hospital, the kittens she later produced had a completely different personality and were suddenly very good-natured and relaxed. Ann was very interested in this personality change, and using other inter-related cats belonging to her neighbour (including one looking rather like a Birman), together with her own Persian cats, she then bred the first Ragdolls in 1963, with the laid-back temperament that she was seeking. However, the development of this new breed took an interesting turn as Ann Baker trademarked the name 'Ragdoll' and anyone else wishing to breed them could only do so on a franchise basis through her own International Ragdoll Cat Association (if they wished to call their kittens 'Ragdolls'), and by adhering to her own very strict breeding policy. In 1994 A group of American breeders voted to withdraw from this situation, and to set up their own breeding programme with a wider range of colours and patterns, and as they could not use the name 'Ragdoll' at that time because of the franchise arrangements, they decided to call their new breed the 'RagaMuffin' after the endearing little feral cats from whom they had originally descended. The letter 'M' was capitalised in the middle of the name, as the new breeding group said they were such loveable 'Muffins' and in May 2001 they gained initial recognition with the American Cat Fanciers' Association, finally gaining full Championship recognition there in 2011. The first RagaMuffins arrived in Britain from the USA in 2008, gaining Preliminary recognition here in the UK from the GCCF in June 2010, and can now be shown in Assessment classes at GCCF shows.

The Ragamuffin is a heavy muscular breed, with a broad chest and powerful shoulders, and there is often a fleshy pad in the lower abdomen. The dense semi-longhaired silky coat is similar in feel to that of a very furry rabbit, and is slightly longer around the neck and round the face, giving the appearance of a ruff. The hair on the hind legs can be quite long, making it look as if the cat is wearing knickerbockers, and there are furry tufts between the toes and in the ears. All coat patterns (including pointed, self, tabby and tortie) and colours (including Seal, Chocolate, Blue, Lilac, Black, Red, Silver, Shaded, Smoke, and Cream) are allowed, with or without white. The range of eye colour includes blue, green, gold, amber and aqua, and the colour is not generally linked to the coat colour, except that the colour pointed versions always have blue eyes.

The RagaMuffin is famous for its calm and amenable temperament, and indeed, the GCCF show standard for this breed unusually includes 15 points (out of 100) for temperament. It is said that the only extreme allowed in this breed is its friendly, sociable and intelligent nature. These cats love people and are extremely affectionate and they will do nearly anything for a tummy rub, and they enjoy playing, climbing and fetching toys. RagaMuffins want to be involved in whatever their owners are doing, and get on very well with other pets and children. They thrive on companionship, and should not be left on their own for long, but they are adaptable and take most situations in their stride.

This is generally a very healthy breed of cat without any known breed-related defects, and is a long-lived breed often living until their late teens.

All my kittens come with a full set of vacinations, a vet check, a 5 generation pedigree with 4 weeks free Pet Plan insurance.They are all registered with the GCCF and the RagaMuffins come from PKD and HMC clear cats.

Although the coat of the RagaMuffin is described as 'non-matting', this breed is nevertheless a semi-longhaired variety and will get knotted if it is not groomed regularly. Most RagaMuffins tend not object to being groomed at all. It is also recommended that they are given a grooming about twice a week. They will eat most good quality brands of cat food. RagaMuffins are intelligent cats.